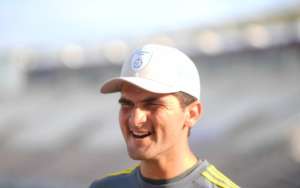 Shaheen Shah Afridi was a part of team Hampshire in the ongoing Blast T20 league. Although Hampshire has ruled out of the game after loosing form Surrey on September, 18 but the team came with a positive spirit and scored a target of 142 runs for Middlesex which seemed quite easy for them to chase as at the end they required only 20 runs in 18 balls to win.

Afridi had previously taken wickets of SS Eskinazi and J A Simpson. When it looked like Middlesex had almost won the match as they were having 4 wickets in hand and a effortless required run rate, but right at time Shaheen Shah Afridi amazed the visitors by casting an entirely unexpected spell.

At 17.3 over, the stunning landmark began when Shaheen broke the partnership of LBK Hollman and TG Helm by getting Hollman out and then he became unstoppable. Another ball, another brilliant clean bowled by Pakistani left arm pacer. The repetition continued until the young stunner finished the game by dismissing consecutively Steven Finn, TN Walallawita and TN Murtagh. He obtained his best league figures i.e. 6/19 and lead his team Hampshire to finish the league in a better way.

He managed to take the first ever double hat-trick of his career as well as Vitality Blast history. He is also the first Pakistani to achieve the landmark. In an interview he gave after his last match of the series, he says that he is happy to achieve this milestone and contributed well in a convincible victory for his team. Watch the full interview of Shaheen Shah Afridi.

Shaheen Shah Afridi is recieving worthy praises from everyone at social media. He is trending in Pakistan twitter at the moment of writing this blog. have a look at the admirations he got after today’s magical performance.

He returned exceptional figures of 6/19 💫 pic.twitter.com/05qOupT3PU

Al Amin Hossain, J Allenby, Lasith Malinga, Rashid Khan, Andre Russell and A Mithun are the other 6 bowlers to have achieved this in T20s#Cricket #T20Blast pic.twitter.com/qsCupoYJIT