Shadab and I are to be Blamed for the Final Defeat: Shan Masood:

Speaking to a website, Shan Masood stated that it was his and Shadab Khan’s fault for not finishing the innings properly. “Shadab and I had worked for the recovery after a little collapse. However, we did not finish the innings well and we are accountable for that”, said Shan Masood.

Pakistan were restricted to a mere 137/8 as the top order completely failed in the final. Shadab Khan (20) and Shan Masood (38) made some valuable contributions to give something to their bowlers to defend. “We were looking at 170. However due to the collapse in the ending overs we could not get there. If even one batsman had stayed till the end, we could have scored 150-160, and that would have given us a good chance in the game. I take the blame for not doing it”, Shan added.

It was indeed brave of Shan Masood to come at front and take the blame on himself. Shan Masood was Pakistan’s joint highest run getter alongside Rizwan with 175 runs. However, Shan’s average in the event was 43, while Rizwan’s average was just 25. Moreover, Shan also had a better strike rate as compared to Rizwan. 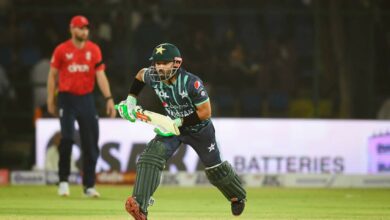