The changes in the World T20 Squad of Pakistan have been made before the team enters quarantine prior to travelling to UAE. 3 changes have been made in the existing squad that was announced earlier by Pakistan. Pakistan Team will travel to UAE on 15th October for the Mega Event.

Former captain Sarfaraz Ahmed replacing Azam Khan is the final change in the World T20 Squad. Sarfaraz has been in good form lately. He had a good season as a batsman in PSL 6 and also in the ongoing National T20 Cup. Azam Khan has been a disappointment so far in the National T20 Cup as he has failed to do anything significant. Moreover Azam was poor behind the stumps as he missed many chances so the addition of Sarfaraz Ahmed gives Pakistan a proper backup wicket keeper choice for the mega event.

Haider Ali replaced Mohammad Hasnain in the final change of the World T20 Squad of Pakistan. Hasnain was in poor form during the ongoing National T20 Cup 2021. While Haider Ali smashed plenty of runs in the event. Another reason behind Haider’s inclusion is the injury of Sohaib Maqsood. Sohaib is however retained in the squad but he has back issues and if things go worse, PCB have an extra batsman in the form of Haider Ali.

Shoaib Akhtar Calls Out Harbhajan Singh | Where are you Harbhajan? Shoaib Tweets

Our Management Shouldn’t Have Been Changed Before World T20: Hasan Ali

Shoaib Akhtar Calls Out Harbhajan Singh | Where are you Harbhajan? Shoaib Tweets

Our Management Shouldn’t Have Been Changed Before World T20: Hasan Ali

Our Management Shouldn't Have Been Changed Before World T20: Hasan Ali

Umar Gul Advises Players to Reply to Critics Through Performance 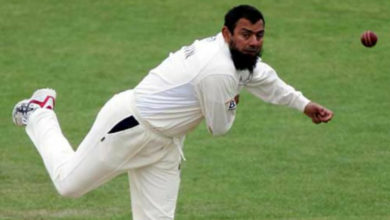