Chief Selector and Head coach of Pakistan national cricket team, Misbah-ul-Haq announced 35 players men squad for New Zealand tour for 3 T20Is and 2 test matches on Nov 11, 2020, which is the last selection by him as he retires from the position of the chief selector. Not including M. Amir and Shoaib Malik in the squad raises questions on his selection again. 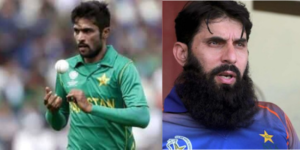 Pakistan national cricket team’s Chief Selector, Head coach, and batting coach; Misbah-ul-Haq announced 35 men squad for New Zealand tour 2020-2021 to begin from 18 Dec 2020 consisting of 3 matches T20I series and 2 matches test series. Misbah also announced withdrawal from the role of the chief selector and expressed his desire to focus entirely on the better training of the national cricket team as a batting and head coach because of the pressure of two jobs at the same time bothersome him.

The 35 men squad for the New Zealand tour

Babar Azam is the team captain in all formats however Shadab Khan and Muhammad Rizwan are vice-captains in T20Is and Tests respectively.

There are a few points at which this team selection is being criticized to a great extent. No place for M. Amir in the T20I squad is one of them. Although Misbah justified the absence of senior players including M. Amir and Shoaib Malik saying that the selection is made focusing to promote young and emerging talent, but Amir’s fans and even Amir himself are not so happy with this decision of ruling out such a senior attacking player even when the T20 world cup is in the following year. The fact that Naseem Shah being unfit and still selected but M. Amir being fit and in form is neglected, is teasing the fans.

This tweet of Amir clearly shows that something fishy is cooking between the management team and retired player from test format, M. Amir. Considering the attacking performances M. Amir has given to the win for Pakistan, and the investment PCB has done to enrich his form must not go in vain and his aggression should be utilized in the winning cause of Pakistan cricket.