The 4th match of PSL 6 will be played between Lahore Qalandars and Quetta Gladiators, tomorrow in National Stadium, Karachi.
The Purple force started their tournament in the worst way possible and lost pretty easily to current champions, Karachi Kings, but tomorrow they will face the runner-ups of PSL 5 who unfortunately for the Gladiators started this year’s campaign with a bang and overcame the hurdle of Peshawar Zalmi.

ALSO READ: EARLY PREDICTIONS OF ISLAMABAD UNITED VS MULTAN SULTANS
In total, both teams have faced off 10 times and both have won five times each, so it will be quite fascinating to see who takes the lead in the head-to-head competition.
This encounter has always provided us with extra entertainment, but this time, the face-off of Sarfaraz Ahmed and Mohammad Hafeez will gain extra attention after their recent clash on Twitter.

The team that bowls first will have a clear advantage as seen in previous matches, but the batting first side can turn the tables if they play with a steady pace in the first 10 overs and conserving their wickets, and then go full blast and set up a good total.

There will be no chance of rain and the temperature will be around 23 degrees Celsius with 65-70% humidity which will then be the cause of dew in the latter part of the game. 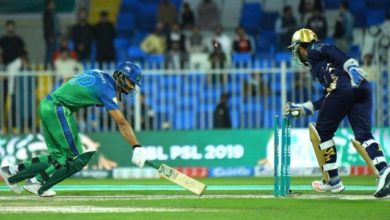